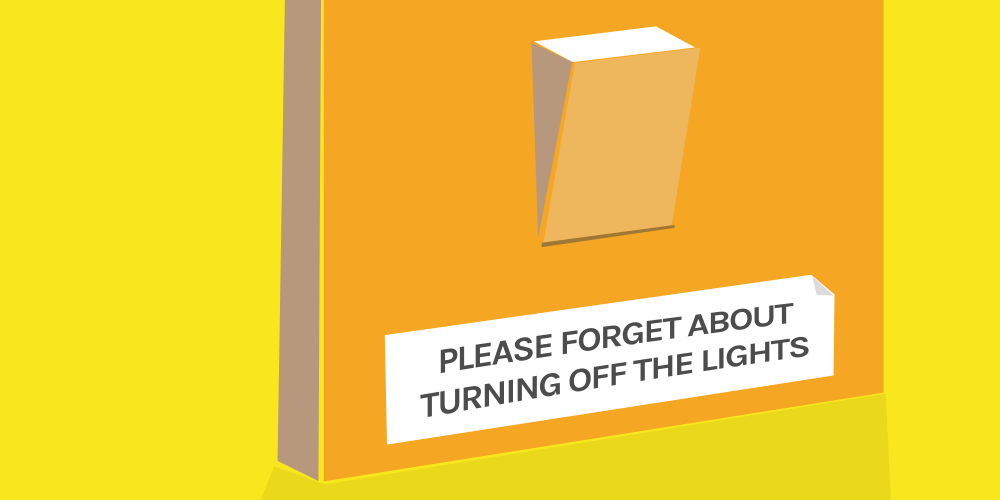 Each week there are fresh reasons to tackle climate change urgently. This week for America it’s hurricane Irma. The records keep getting broken, and ice keeps melting faster than we expect. But it’s been years since it was hot news or something many politicians thought was a vote winner.

There was a time when calculating your carbon footprint was in vogue. You could end up with all sorts of answers. Sadly that never helped very much, but at least it showed people cared.

But, thanks to a barrage of well-meaning but ill-informed or unconsidered advice, we care about many of the wrong things.

So, not because there isn’t really a big problem, but because there really is, we need to stop worrying about some of the stuff which makes so little difference.

1. Stop turning off the lights

You’ll save vastly more energy by replacing any old, hot, incandescent bulbs you still have (often spotlights now) for LED bulbs. They’re great now – cheap, warm-coloured, instant light. You can replace them immediately (don’t need wait for them to blow – a badly inefficient bulb is better thrown away than ‘used up’)… then chill out. It wasn’t the few hours that those old bulbs were ‘left on’ that was ever the problem, it was just all the hours they were being used at all.

Now that you’re using 90% less power, feel free to go around leaving lights on with abandon. The amount you’re now wasting is trivial, and your effort and focus is entirely better spent anywhere else.

And, please, peel off those “turn off the lights to save the environment” stickers wherever you see them.

Modern devices made in the last 5-10 years have got much more efficient transformers and usually use utterly marginal amounts of power when on standby. Phone chargers these days don’t even register on many power meters (under 0.1w). If the little red light bothers you, feel free to turn it off, otherwise luxuriate in the splendour of being free to not chase around your plug sockets.

(Special interest note: if you have a hot tub… leaving one of those bad boys on ‘standby’ to keep the water hot when you’re not using it is chugging through huge amounts of power. Easily hundreds of pounds a year. Turn its thermostat right down and it won’t freeze; it’ll reheat from ambient temperature within a day, and only takes about 4 days of unused standby heat-loss to make that worth doing.)

3. Use plastic carrier bags if you want to

Since England caught up with the 5p carrier bag charge the use of them has plummeted. Which is good, and shows that they were mostly excessive and not needed. But now that everyone has a modest incentive to not be completely ridiculous with plastic bags, we can all calm down. No, that smug “carrying the world in my hair sack” hemp tote bag isn’t more sustainable (unless you really do use it hundreds of times), so stop bragging. Just use whatever bag suits your trip. Probably the bag you own already. Whatever. Ease up. Move on.

4. Don’t worry about how ‘green’ your power supplier is

If you’ve never switched then, yes, you can probably get a cheaper deal, so have a look. But I don’t buy the hype about switching based on where the supplier gets their power from – it’s mostly just accountancy. Unless you’re buying from suppliers which directly invest in renewable capacity, like Ecotricity and Good Energy, then your supplier is only reselling you a warm fuzzy feeling. The same renewable power is already getting built, and sold, regardless.

There’s more than enough wholesale demand already to buy what renewable power there is on the grid, so suppliers boasting over who gets to resell it to their customers (us) doesn’t help the industry grow. The market is complex, and if you can explain how I’ve got this wrong, I’d love to hear from you.

If you do want to help renewables by your switch, try Good Energy. I believe they actually are investing in renewable power and gas. You (and I) get a £50 credit if you use this link https://goodenergy.mention-me.com/m/ol/mw9ob-48a87953be Sorry for the sell. That’s it.

There is a lot of crap out there, especially when it is marketed as saving the world (and solving your guilt all at the same time – neat!). Standby savers, socket timers, solar powered battery lights/chargers/keyboards, insulated kettles. It all has to get manufactured, and then usually thrown away once the fad wears off. It is far more efficient to get our power from the mains than lots of tiny rechargeable devices. Unless you know how much carbon a thing is actually saving, and it’s more than spitting in the wind, don’t bother. Just buy less nonsense, and choose quality things that will last.

An exception if you’re a bit nerdy (well, you’ve read this far): a plug-in power meter. Help prove to yourself, and the friends you can lend it to, just how little power your phone charger wastes… and probably conversely how much your fridge does. One that can meter a single appliance cumulatively over time can tell you what really adds up in ways a smart meter can’t.

The impact of our food production is a big deal. How far it has been transported… not so much.

Unless stuff has been air-freighted fresh around the world (asparagus from Peru etc) then it’s probably just being grown somewhere that suits growing it better, and shipped slowly (does shipping also need to get cleaner? Yes, of course). Bananas from the tropics are picked green, and have weeks of life before they need to make it onto our European shelves. No worries.

Far worse is heating greenhouses in cold countries, instead of shipping produce from somewhere naturally warmer. So beware the boast of British strawberries, tomatoes and salad etc when they’re out of season.

Meat production however, especially beef and dairy, is really, super-intensive wherever.

Well, what things are worth doing then?

With all the extra time, head and heart space you’ve now got free, are there any things that you can do that are worth your while?

I’m hesitant to get into this “telling you what to go and do” game, after so much counterproductive nonsense has come from it. But my best suggestions are these.

Get political – talk about it and vote for it

Big changes need rule changes. Talk or write to your MP and councillors about how important climate change is and ask what they are doing. They can’t hear this often enough, and need to hear that you support it. Encourage them to speak up, and to pursue bold, urgent policies. If they won’t act (not just promise) then move on to protest. In the streets, causing a fuss, seems to be most effective. We need government to provide things like

They’ve improved so much in the last couple of decades that a fridge over about 10 years old is probably wasting you loads of power; easily tens or hundreds of pounds a year. Even the most basic new models are much more efficient now, and will pay for themselves in the savings within a year or two. The energy used in making a new one is far less than what’s being wasted by an old one, so upgrade as soon as possible.

Not very sexy, but easy and surprisingly effective. If you’ve got cold air blowing in then plug it up. Old windows, letterboxes, doors etc. Silicone grouting around your skirting (phwoar) can be an easy win.

Insulate whatever you can

Heating is our biggest energy waste in the UK. Most homes could be much more comfortable and cheaper to run with proper insulation. If you’re lucky enough to own your home, it makes complete sense to get on with stopping your heat leaking out of it. (Otherwise, if your landlord won’t do this, head back to the political point above.) Modern doors and windows, deep woolly stuff in any loft space, and if possible cladding the walls and floors too.

Notice that none of these things are lifestyle changes.

They’re one-off improvements which can have significant on-going impacts. Even if something will benefit us (like improving our health or community) it’s harder to change our habits and lifestyle, and nagging or bragging about the trivial ‘eco’ stuff we do isn’t going to do it. Let’s get on with the easy, set-and-forget stuff first.

Then, whisper it, maybe we can concentrate effort on how to do the trickier lifestyle things like speaking out, going vegan, car free, whatever.

But mainly… let’s cut the green crap. And relax.

Update 2021: I revisited this after writing it 4 years ago, and was surprised how well it had aged. Some things don’t change. I just wanted to change a couple of things. One: going from suggesting Ecotricity to Good Energy, as I’ve got so concerned about Ecotricity’s nationalistic approach, which peaked with it fronting the Daily Express Green Crusade. For more on something we need to be more wary of: a delve into this murky turn of right-wing environmentalism.

The other was to add a step on the ‘be political’ front: protest. One main thing I’ve understood in the last few years is just how limited the ‘asking leaders to do things’ approach is. It doesn’t work, and it gives up our power and agency – we can do more by acting ourselves to confront, unmask and dismantle power. Julia Steinberger explains it well. This includes civil disobedience, non-violent direct action. You can join in a local group in lots of ways (not just ‘getting arrested’), and Extinction Rebellion do it very well.