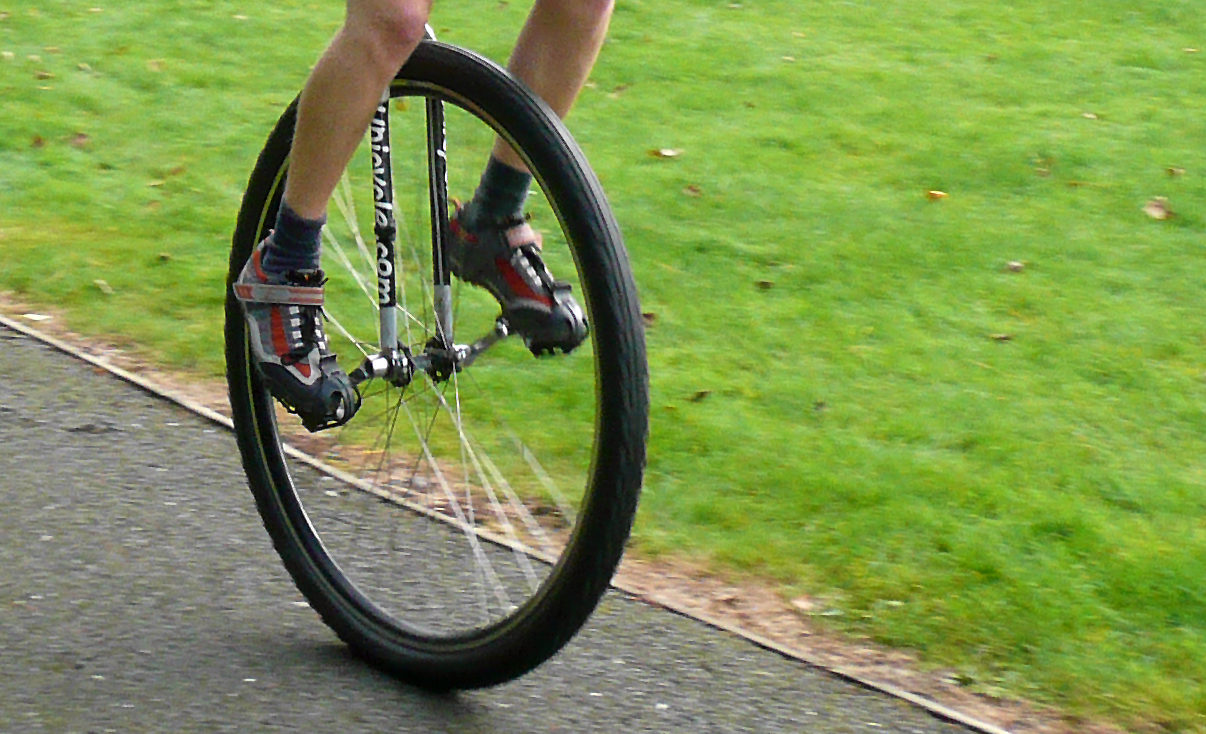 “Keep it going, nice and steady.”

A good thing to hear when you’re riding a unicycle in the middle of the night.

Stephen McCartney’s soft Irish tones wafted through the 3am darkness on Aberystwyth’s athletics track. He was one of the many friends, colleagues and lecturers who stepped in to act as witnesses and recorders for my 1141 laps.

This was further than the 378km by Ken Looi in New Zealand a few years before and so became a new Guinness World Record.

To my surprise, ten years later, it still stands.

I thought I’d take this anniversary to remember a few things about doing it, and leave a few tips for whoever hopefully takes it off my hands (they’re made to be broken after all).

The riding is almost the easy part.

I’ve been to a few international unicycle championships to race, and been fairly steady at getting top 5 places. But never a podium position, or a win. So I’m a reasonably strong rider but there are others stronger (and more who never get along to those races).

But what it takes to challenge a record like this is not just decent riding (and ability to withstand tedium), but admin and event planning. You need to find a suitable track (for measuring purposes it has to be done on a circuit), get permission to use it, have it surveyed, and have access for you and your support team during the day and night.

I was lucky to get the support of the university sports department who allowed us to use the track, floodlights all night, and changing blocks for toilets etc. We also borrowed some digital clocks for the timing.

You have to rope in a lot of people

Guinness guidelines require that your riding is documented by at least two people at all times. In theory these should be ‘respectable independent people’ (not just all your mates). With a combination of my uni department lecturers, and being part of a large church in the town, I was lucky enough to get the support of a range from magistrates and professors, to youth worker Stephen, to president of the International Unicycle Federation Connie Cotter.

They each did shifts of a few hours, writing down and countersigning lap times on the log sheets.

Then there was a great number of other friends who came along, set up camp at the track, and supplied everything from hot food, random snack requests, back stretches (during brief breaks), unicycle pit maintenance (swapping crank lengths from 90mm to 102mm part way through as I got more tired and didn’t want to risk a fall). Also cheering, chanting, bunting, flags, riding alongside, photographing and film-making. And getting champagne to pop and arranging for the retired town crier to show up at the finish line to declare the result. I also had support from Unicycle.com (in case you’re wondering where to get hold of quality and specialist unicycles).

The view from the wheel

To actually mount up and set off was a bit of a relief. There was only one thing left to do: just keep pedalling.

I slightly rashly aimed for a fairly fast pace to start with and did the first 100 miles without a stop, in an attempt at breaking the 100 mile record at the same time. By about 80 miles in I’d dropped from the pace needed and, despite a last push, I couldn’t match it. It did mean that I’d done a 100 mile non-stop ride though, which was another record. So I kept going after that mark for as long as I could before feeling I could really do with a first break, at 105 miles, 170km.

Since learning to ride with the usual wobbles and wipeouts a few years before, it was a bit strange to find that I’d done the most not-falling-off (distance-wise anyway) bit of riding ever on one wheel.

It’s all about finding your obscure niche and ploughing it. #wisdom. Or something.

I started at 9:30am and so went through a full day and then the night. It turned out that doing an all-nighter like this is possibly easier than one sitting hunched in front of a computer. With the continuous activity to keep adrenaline going, and eating regularly, I think my body was conned into not realising it hadn’t slept. It did get colder though, so I had to layer up.

I took quick breaks increasingly often towards the end. Of the 24 hours, 22 were riding and 2 were out of the saddle.

Once I’d finished it caught up with me, and I was too stiff and spent to do a lot. It’s not a great posture to keep for that long, and my lower back was very sore. I’m not sure how much saddle soreness there was, but numbness took over for a while.

The most long-lasting effect was my right thumb and forefinger lost some feeling and didn’t get back to normal for months. It must have damaged a nerve by the way I was resting on the handlebars. As war wounds go it was not too hard to live with.

15 minutes of fame (or infamy)

Thanks to the university press officer I got featured in TV news for ITV (as a spot with their “and finally” guy, like something from the Truman Show). There were tiny column mentions in most of the national papers, and somehow ended up in the press in Australia, and elsewhere around the world.

I did my first radio interview, from the sound booth of the BBC Wales broom cupboard on campus. It was a lesson in media training, since I got a bit frustrated at what felt like bizarre and silly questions (what, not taking unicycling seriously?). I soon realised than when you’re promoting something unusual you shouldn’t expect the public or journalists to already get it, and to take the questions lightly as simply a prompt for you to steer the message that you want to get across. And chill out. 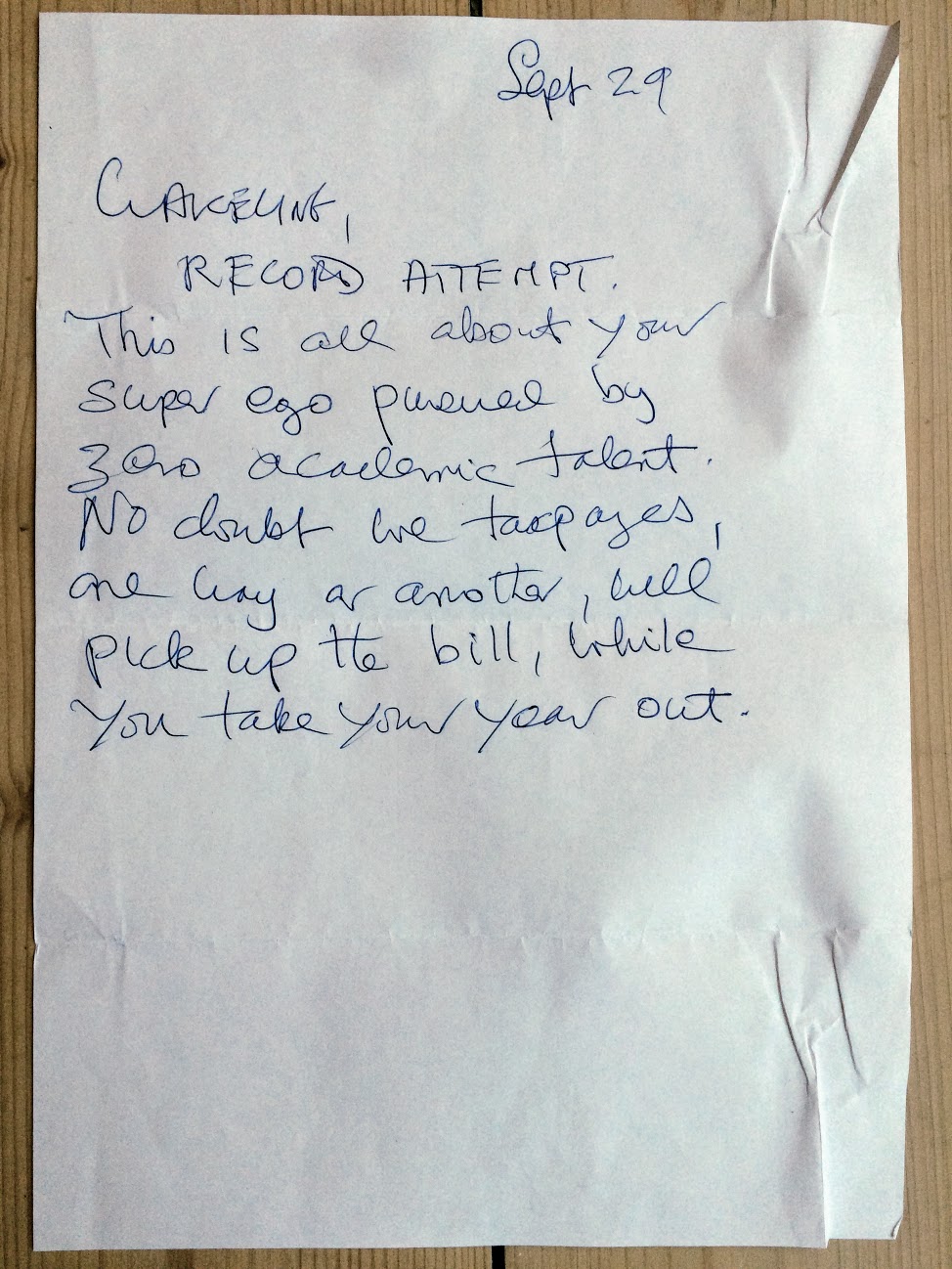 I also got my first and only piece of hate mail. A few days after the press coverage there was a letter passed to me via the university. Sent second class (I know my place). After the initial confusion of what it actually was, it was both one of the saddest and funniest things. Whoever sent it, I’m sorry for your incoherent rage, but thank you for the entertainment. (And, sorry, but my ‘year out’ was long gone by then.)

So, for the next holder of this record

If all of the following are too obvious, then just get on with it. Good luck! A few things that helped me though:

The next target has to be 500km. I think that could be doable ungeared, with a really good rider and track and conditions. Maybe further with a geared hub too…